The only reason I started writing this blog post 2 days ago, instead of  continuing to furiously tend my lost crops, is because it was pouring rain. When it started raining, I was where I have been nearly every daylight hour for the past three weeks: in my field (or “patch,” as my father calls it). I was weeding an experimental plot of maygrass. Undeterred, I kept weeding for another 2 hours, until the mud was sticking to my fingers and I could no longer pull weeds with the precision necessary to avoid pulling lost crops, which are also weeds. I said a silent but sincere Thank you to the Earth for finally watering my babies, then packed it in for the day. 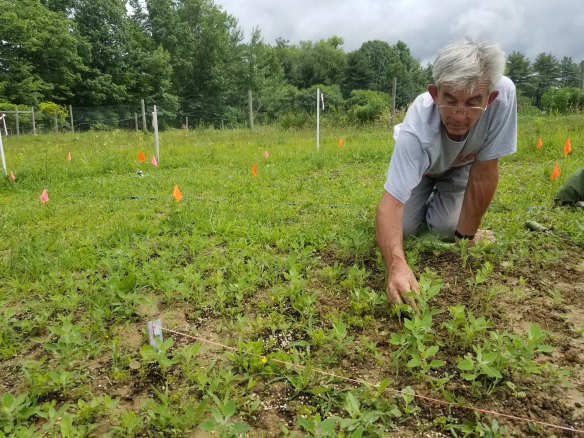 My Dad, Tim Mueller, weeding one of the goosefoot plots after some much needed rain. It’s surprisingly difficult to weed when you’re cultivating…weeds.

Average precipitation for June in Ithaca, New York, is 3.85 inches –we have received only 2 inches this month. It shouldn’t be necessary to irrigate weeds, especially in a place as wet as central New York, but I needed to keep the seed beds damp to encourage as much germination as possible. When I got home from a conference on June 14th and found the parched, clayey soil actually cracking, I made an emergency trip to Tractor Supply (one of many) for hoses and a sprinkler. Not the most high-tech irrigation solution, but pretty much all the tap near my field can handle– and works in a pinch. The best time to be out in the field moving a sprinkler around is just before sunset on these long summer days. I can bring my dog and book, or puzzle over small oddities in my plants in peace. 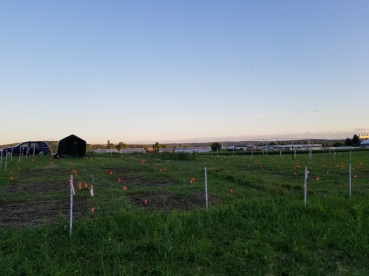 The patch at sunset. 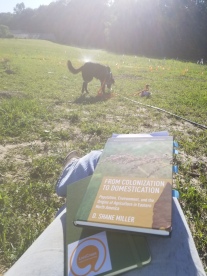 Enjoying some quiet watering and reading time with my dog.

The saga of getting these plants to germinate began back in December, when I started experiments to see what kind treatment the seeds of each species needed make them sprout. Domesticated plants have been selected and bred by people for thousands of years to germinate as soon as they are planted. The thing about wild seeds is that they have never been able to count on humans to collect and store them in safe places, then plant them somewhere that they will like the next year. Instead, they have evolved diverse means of protecting themselves from freezing, flooding, drought, getting chewed on and digested by animals– and then, when conditions are just right, “knowing” that it is time to germinate. 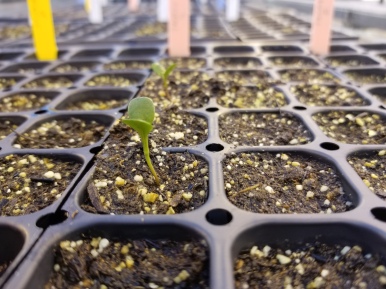 Sumpweed germinating in the greenhouse. It hasn’t done as well outside.

Trays of seeds experiencing simulated winter in a cooler.

Over the course of the winter, my research assistants and I developed some pretty good guidelines for treating the seeds of each species. Although we weren’t getting the 80% germination that you can expect from most store-bought seeds, we were getting at least 25% and sometimes as high as 70% with our most successful treatments, and we applied those treatments to the seed stock for the main experiments I had planned for this summer. Between May 2nd and May 18th, we planted everything in experimental plots and started the vigil for sprouts. 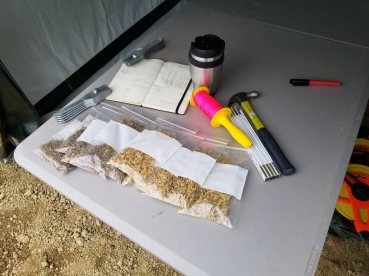 Seed batches ready for planting in early May. 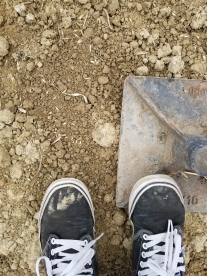 We scattered the seeds and then used a tamper to lightly press them into the loose soil.

Even after months of preparation, I was far from confident that all five species would grow. Those germination experiments were conducted in the greenhouse. The greenhouse might as well be a different planet when it comes to experimental results. On Planet Greenhouse, every day is 12 hours long. It’s always 80 degrees during the day and 65 degrees at night. Planet Greenhouse is made of homogenous, rich, loose, potting soil, which is always perfectly moist, but not too wet. There are almost no bugs, and no larger animals to chomp on tender seedlings. It’s a wonderful planet for baby plants, but not at all like Planet Earth. 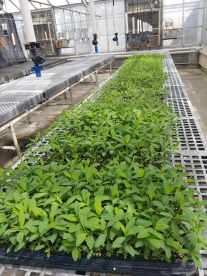 For one of our experiments, we started knotweed plants in the greenhouse. We’ll see how they do after their recent move outside. 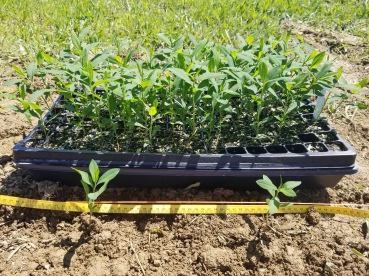 Transplanting greenhouse plants. It’s best to do this on a cool day and water a lot, but it’s still shocking for these pampered seedlings.

After 8 weeks of weeding and watering and watching, we have now counted over 5,000 seedlings representing all five lost crops in three different experiments. Some are behaving a little strangely, but that’s to be expected given that I’ve taken them out of their habitats and life cycles.

Some of the freshly weeded and watered plots, full of thousands of seedlings at last — I had a lot of help and moral support from my Dad (background) this week.

For example, consider the two lost crops that are spring maturing grasses, maygrass and little barley. In the wild, they germinate either in late fall or in very early spring, and by June they have already produced all their seed for the year and died. I couldn’t plant them in early spring here at Cornell, because there were several feet of snow on my field in March. That’s normal western New York stuff, but by mid-April things were getting a little upsetting. I had to push back the preparation of my field for weeks, until after the last snow, which occurred as I was laying out experimental plots in mittens and boots on April 30.

Laying out the field on May 1. There was snow the day before.

That’s one of the many downsides of leaving Planet Greenhouse for Planet Earth: weather. I decided to make lemonade from crappy spring lemons and look into something that my colleagues and I have been wondering about: Would it have been possible for ancient people to get two crops per year out of these species? If you plant seeds after the first harvest in May, could you get another crop in late summer? 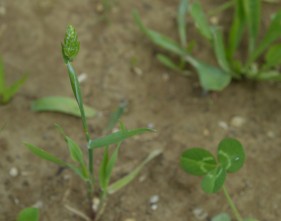 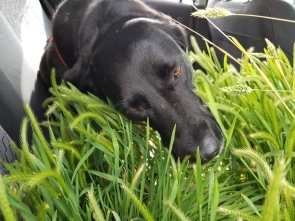 My dog munching on some little barley.

I planted maygrass and little barley in May, and they are just starting to flower now. The jury is still out, but its looking good for two-crop lost crops! The maygrass is doing something odd. Instead of growing to ~40 cm before flowering, some of my seedlings are producing flowers when they are only 4 cm tall. If they can muster the energy to produce seeds with so few leaves, this is not necessarily a bad trait from a farmer’s perspective: more seeds in less space and time. It is also interesting to see how the maygrass and little barley interact. We’ve gotten the best germination and the earliest flowers in the plots where the two species are grown together. 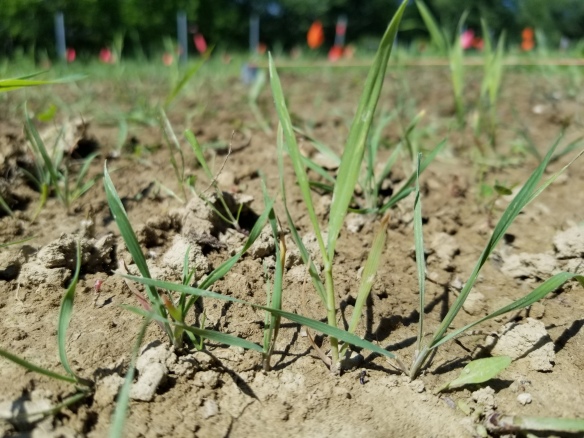 Maygrass and little barley germinating together at the beginning of June.

Other experiments have not been as successful. Out of thousands of seeds sown, I’ve counted only 12 sumpweed seedlings. I spent four entire work days weeding empty sumpweed plots, hoping they would germinate if I kept them clear and moist, but so far no luck. The dry weather this June is probably worse for sumpweed than for the other species, since this plant grows in marshy locations (its other common name is marsh elder). We are still hoping for some late comers, but even if they never sprout we’ve learned something valuable about sumpweed – how not to grow it. 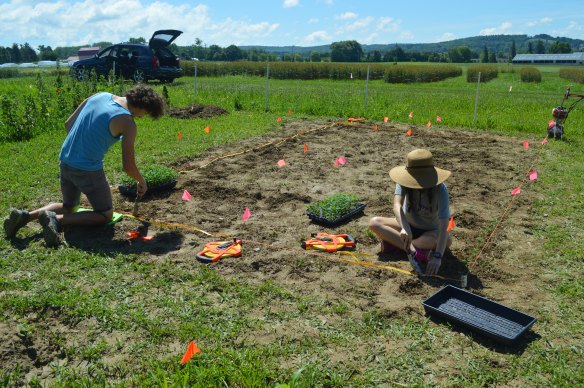 My research assistants, Peter and Andrea, transplanting knotweed last week. This was the last experiment we set up, and the only one that relied on plants started in the greenhouse.

As of yesterday, everything is finally laid out, built, planted, and weeded (for now…), and this week we can concentrate on collecting data for the first time. It’s been the busiest two months of my entire life, but it’s wonderful to see all of these plants growing together and I am looking forward to learning from them everyday for months to come. 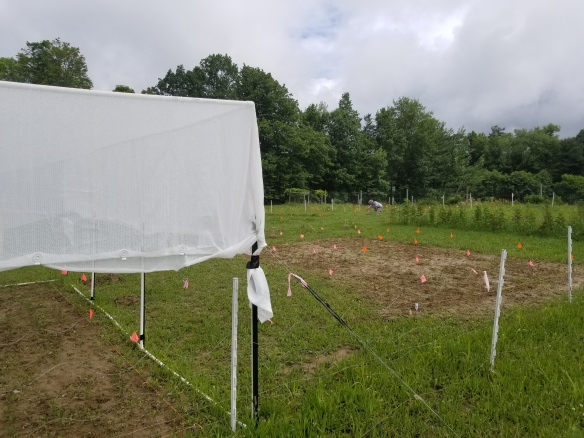 This final experiment we set up is comparing knotweed responses to sun and shade — but more on that next time!

1 thought on “Growing lost crops: It has begun!”